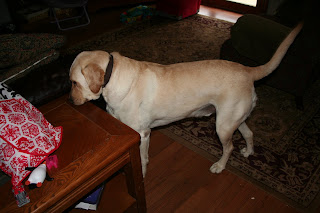 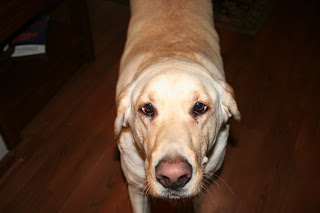 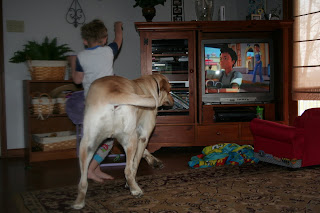 We have been dog sitting for a friend. The kids were thrilled about having another dog in the house. Lew Lew, our faithful steed, is- well- there just is no delicate way to say it- he is old and fat. So he likes him some serious quiet time during the day and can't really be troubled by too much silliness like chasing balls or going for pointless walks. 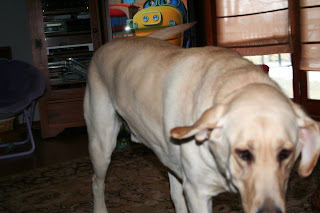 But this dog- whose name is Riley- well he is all puppy! And he loves to play! And he's the size of a sofa! I have never had a dog in the house that I had to worry about what I had on the kitchen counter- until Sunday that is. Now I am very aware, because if I am not, well then Mr. Riley just plops his head right on the counter to take a look! 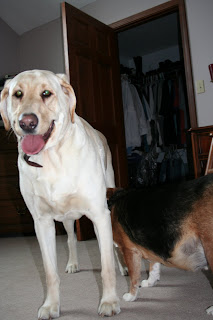 Riley will be going home this morning. The kids are upset, Allyson even cried. Personally- although he has got to be the sweetest dog ever, he drinks like 46 gallons of water a day, drips water EVERYWHERE while doing so, and has paws the size of saucers which when wet from snow and mud make the floor look like the aisle at Walmart. So although it's been nice having some canine energy in the house, I am relieved it was just for a short visit. 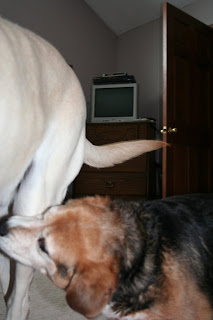 Heck, Even Lew did everything he could to make hime feel welcome : )
(He also managed to trap him in the bedroom and wouldn't let him out. Lew wanted Riley to know who was in charge.) 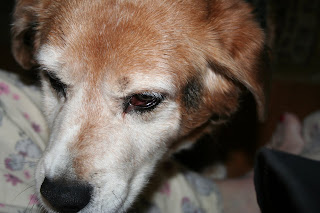 Yesterday, Sam asked if we could keep Riley and give them Lew instead. I do not think Lew was amused. 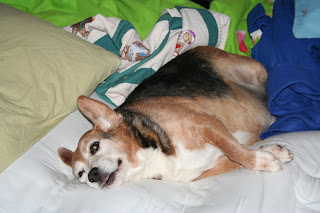 He's just looking forward to getting this mammoth dog out of here so that his little life can go back to normal. Trying to chase around this 3 year old puppy horse has worn him out!
Rambled by Mynde at 8:26 AM

You know, I really don't know which is more disturbing...Lew sniffing the other dog, or the fact that you were down there taking pictures of the whole process.