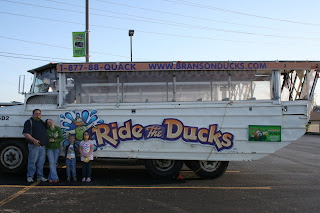 While looking through websites prior to our trip, Sam and I stumbled upon something called a duck boat ride. He was sold. I don't know if it was the word duck, or boat, but either way he wanted on that thing.

Upon investigation, we discovered that it was in fact a car and a boat. It would drive around the streets of Branson and give us a little tour of the area and the lakes- and then drive down a ramp really really fast and 'splash' float around on the water. 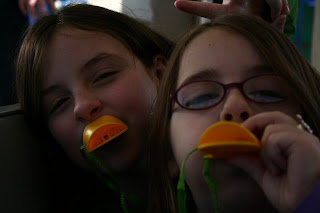 Regardless- Sam was pumped and we checked into it the first day we could. Armed with a fistfull of cash we bought our tickets and were given these handy dandy duck whistle things. Branson was not exactly filled with folks during spring break (bonus- we are not crowd people) but the people who were there were more the MCL crowd- if you catch my drift. 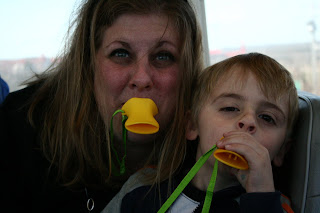 So we were in fact the only children on the entire duck boat ride. And I'm thinking everyone on the boat might have paid the tourguide to save the whistles for the END of the ride- versus prior to boarding. 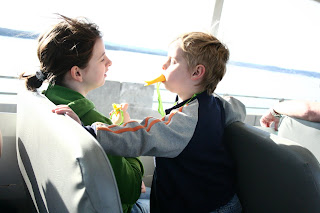 But that is just a hunch. 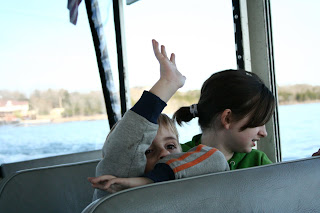 Once we splashed onto the water- the driver asked if anyone would like to drive the boat. I kid you not- a completely gray haired man jumped up and beat my kids to the driver seat. I was dying laughing- it was awesome! 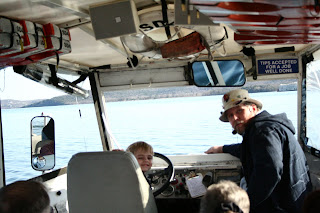 But once the tourguide booted the old man out of the front- all kid Gobles did in fact get a turn. 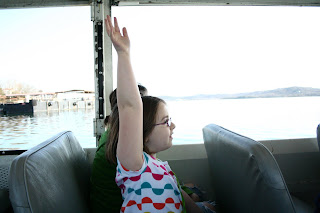 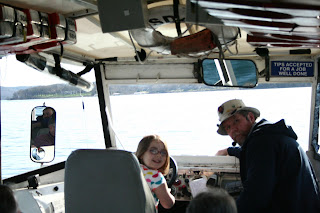 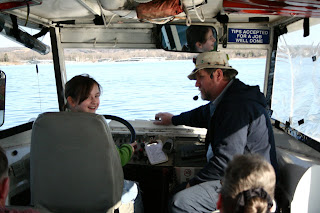 Which was also awesome.
They really enjoyed it- and no body hit anything. Bonus.
Part of the tour involved driving way up in the woods- where they had the biggest butterflies I have ever seen! 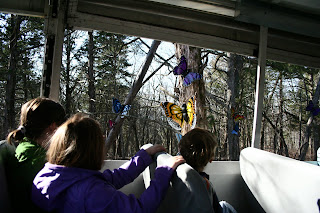 The ride was more like a show- the Driver was light hearted and hysterical. He popped nice clean jokes the entire time while also pointing out this and that. Even Dan commented about how enjoyable it actually was............ 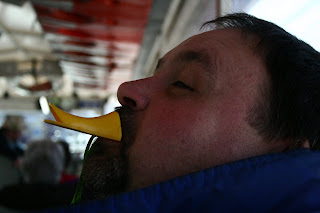 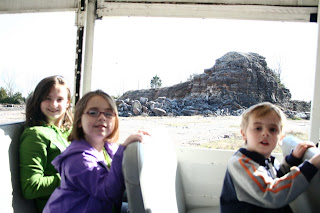 About half way through the ride- I thought to myself 'boy I hope no one has to use the bathroom' and then Sam said 'I have to go potty'. Great. Dan says- hold it bub. Me, being the mom to this frequently peeing child who doesn't speak 'hold it' knew I had to figure something out.
In my purse- a ziplock filled with batteries (I know- what the heck?). Stragegically we tried to pull out his 'thing' and pee into a baggie while not drawing attention to ourselves. We actually did it. Then I only had to worry about getting the urine filled bag out of the boat and into a trashcan without being discovered.
Which actually turned out to not be a problem as the bag apparently had a hole in it and, being the woman that I am, managed to pour it into the lake while on our ride. So then all I had to discard was a wet baggie- which didn't draw any attention to my relief.
It was either that or continue letting it trickle out on our seat.
There are many times in my life I wish I still carried wet wipes in my purse- this was one of them. 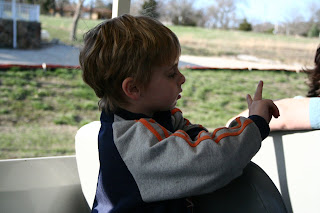 This child- I tell ya. While tooling along back to the duck boat place- I noticed Sam carefully studying his fingers......... 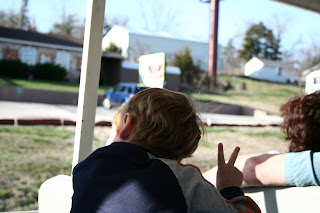 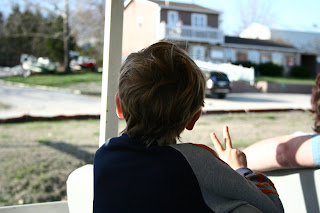 Sometimes I wish I could get into that little blonde head and see what is going on in there.
Rambled by Mynde at 9:25 AM

You could take that purse of yours on "Lets Make a Deal" and have everything that crazy game show ever could desire.

I would have been dangling a kid overboard, I'm afraid!