More from the fabulous fall festival......again.

So last night was the schools annual fall festival. Let me start off by saying that it WAS fun. Regardless of what you are going to read, it indeed was a good time. The kids had a blast, we were surprised with Grandma and Grandpa being able to go with us, and it was awesome to see Allyson and Emily in 'their' environment with their friends. Not to mention, I love seeing all the other moms.

That being said.........
I volunteered in the balloon/dart game room. Imagine, if you will, several hundred small children- fists gripped tight around strips of game tickets- throwing darts. Nuff said. As our shift ended (our as in Emily and mine- she is always wanting to help with whatever I'm doing so she joined me during my shift), she decided to get in line and give it a whirl. Dart one- no balloon. Dart two- no balloon. Dart three- I kid you not- sailed straight for me and came within INCHES of my HEAD. Holy cow batman- it was so close that I nearly passed out!

Allyson- being in fourth grade and all now- was given the freedom to run amok with her friends during the festival. Equipped with strips of tickets and her dad's cell phone- we sent her off to enjoy one of the benefits to being the oldest sibling.

I should have set rules. Because within an hour she reproduced herself having spent all her tickets. What on earth could she possibly have spend 30 tickets on in one hour you ask? 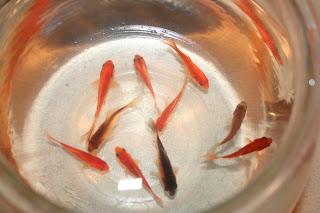 The goldfish game of course.
We are now the proud owners of 11- count them 11- goldfish. However- if you did count them and only counted 10- it's because one has already met his maker.
Emily won 1 goldfish. Sam won 1 goldfish. And Allyson won 8. The last one, in case you are wondering, was gifted to us by one of Allyson's little girlfriends. Bless her heart, 10 would have never been enough, we definitely needed 11.
That mistake, my friends, will only be made once. Next year there is no way possible that I will forget to stipulate how many gold fish will be coming home with us. No way. Nut uh. Nope.
Nor will I forget the red slime prizes. Should there be any offered next year as an option, we will NOT, under and circumstances, choose the slime. As wonderful as red slime might sound to you, I have learned that, when allowed to lie on the counter tops for instance, it will dry and NOT be able to be removed. Nice.
So- notes for the file for next year: wear a helmet, put a limit on the fish, no slime.
Rambled by Mynde at 6:01 PM

No thank you- we have our own. What kind of crazy lunatic would provide those kind of toys as prizes???????