Imagine my surprise to wake up yesterday and look outside and see snow! It completely catches you off guard when you, well, you know, are completely isolated from anything adult- including the news! They don't typically offer updates on nickelodeon or PBS- so I'm always in the dark!

All of the kids were excited- but I think Sam was the most. He was absolutely amazed and immediately opened the door and stuck his naked toe into the frozen white stuff.

Inside he came, ran to his room, grabbed his rain boots (yes- rain boots), his winter coat and back he came. I ran to the kitchen to grab my camera and when I got to the back door, there he was- laying in the snow making an angel........ 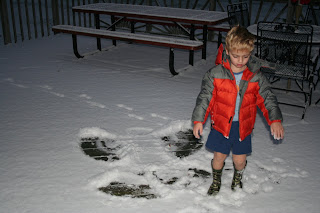 Hello child protective services- he was only out there for a minute and I swear I wouldn't have allowed him to lay down in the snow while only wearing pj's. That would be irresponsible. Of course I brought him in immediately and wrapped him in a blankie. But not before I snapped this picture.

Who would have thought that his first inclination upon walking into the white stuff would have been to lay down in it?
Rambled by Mynde at 7:22 AM

How funny is that! Our kids wanted to make snow angels, too, but didn't get it done before they tromped all over it. Who wants a snow angel with a footpring right on its chest?

What a perfect angel!